In this issue of Capitol Connection, find updates on the final legislative push before August recess. In addition, new guidance and compliance processes from the Department of Education are included. Please continue to use the Autism Society’s online Action Center for voting information, links to legislation we monitor, and sample letters to use to educate Members of Congress. 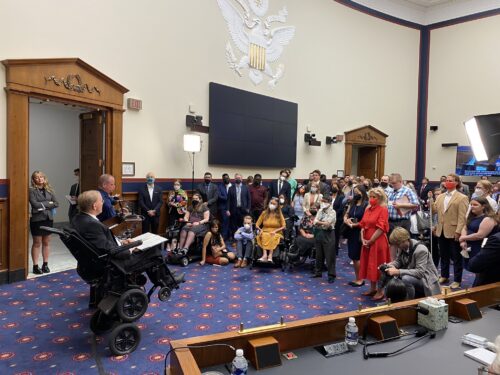 July 26 marked the 32nd anniversary of the Americans with Disabilities Act (ADA). The ADA is a civil rights law that prohibits discrimination against individuals with disabilities in all areas of public life, including jobs, schools, transportation, and all public and private places that are open to the general public. The purpose of the law is to make sure that people with disabilities have the same rights and opportunities as everyone else. The Autism Society participated in a bipartisan congressional celebration hosted by Bipartisan Disability Caucus co-chair Rep. Jim Langevin (D-RI) and featured remarks from House Speaker Pelosi (D-CA), Majority Leader Hoyer (D-MD), Sen. Casey (D-PA), Rep. David Price (D-NC), and President Biden. President Biden expressed his commitment toward advancing disability equity, dignity, access, and inclusion. President Biden also thanked Representative Jim Langevin for his service as he wraps up his last year in Congress. Langevin announced that Representative Debbie Dingell (D-MI) and Representative Brian Fitzpatrick (R-PA) will be co-chairs of the Bipartisan Disability Caucus in next year’s legislative session. See President Biden’s full proclamation and a fact sheet highlighting actions the federal government has taken over the past year to promote greater equity and inclusion for Americans with disabilities.

Senate discussions on reconciliation resumed following the Independence Day recess. While the Autism Society and other national advocates are still pushing for investments in home and community-based services, Senator Manchin (D-WV) indicated he will not support a legislative package with significant expenditures. It appears that the reconciliation bill will focus on prescription drug pricing and health insurance affordability. The measure may be taken up on the Senate floor next week. Amendments will be permitted. Please continue to educate Senators on the need to invest in home and community-based services under Medicaid.

Representatives Jim Langevin (D-RI), Karen Bass (D-CA), Don Bacon (R-NE), Brian Fitzpatrick (R-PA), and Brenda Lawrence (D-MI) introduced the bipartisan Equality for Families with Disabilities Act (H.R. 8335) earlier this month. This bill protects parents with disabilities from discrimination many families face in terms of intervention or scrutiny with child welfare agencies. The press release from the Representatives states that over “30 states currently list disability as grounds for termination of parental rights” and that this bill seeks to remedy that by restricting the rights of a parent solely based on disability status and instead conducting a fact-based evaluation. The Autism Society will continue to monitor this bill.

Last week, Representative Bobby Scott (D-VA), introduced the Healthy Meals, Healthy Kids Act (H.R. 8450). This bill seeks to make the school meal program and Supplemental Nutrition for  Women, Infant, and Children (WIC) expansions that were granted through the pandemic permanent. More specifically, the bill will expand free meals for schools, by ensuring students on Medicaid automatically receive free meals. In addition, the bill will expand WIC eligibility to age 6, authorize a Summer Electronic Benefits Transfer (EBT) program, and Strengthen the Child and Adult Care Food Program which reimbursed additional meals and snacks for low-income families. See the press release for more information. This bill is scheduled for markup in the House Education and Labor Committee this week.

The United States Department of Education Office of Civil Rights recently updated its Case Processing Manual. This Manual outlines how the Department investigates complaints and compliance issues. Anyone can file a complaint when discrimination based on disability, sex or gender, or age is occurring within an entity that receives federal funding, such as public schools or vocational rehabilitation agencies. A complaint can be filed using this online form.

Report on Caregiving for Military Personnel

The U.S. Government Accountability Office (GAO) released a report entitled “Military Personnel: Opportunities Exist to Improve Access to Services Supporting Caregivers of Dependents with Special Needs.” This report investigated access to respite care for caregivers of special needs dependents and provided two recommendations to the Department of Defense to improve access for military families. The Autism Society provided input to the GAO as it was gathering evidence.

The U.S. Ability One Commission issued a final rule that prohibits payment of subminimum wages on contracts within the AbilityOne Program. Employees will be paid their federal or state minimum wage, whichever is higher. Chai Feldblum, Commission Vice Chairperson, said, “Mandating that employees on AbilityOne contracts may no longer receive subminimum wages is a significant step. Wages send a message of how work is valued, and the work performed by people with disabilities should be valued equally with others.” AbilityOne currently employs 40,000 individuals who are blind or have more significant needs working at more than 1,000 locations across the country. The rule is effective as of October 19, 2022

In 2024, a Disability Supplement Questionaire will be added alongside the monthly Current Population Survey, which produced unemployment and labor market rates. The Disability Supplement is very detailed and allows for a deep analysis of the disability employment and unemployment rates in terms of sex, race, ethnicity, age, educational attainment, etc. The Office of Disability Employment Policy under the U.S. Department of Labor is currently seeking information until August 8 from the public on disability employment issues as they plan for the Supplement. Please send any recommendations to be included in Autism Society comments to Kmusheno@autism-society.org.

5 Tips for a Sensory-Friendly Thanksgiving

Coronavirus Information Series: “Preparing your IEP for Back to School” with Anne Holmes, hosted by MyHana