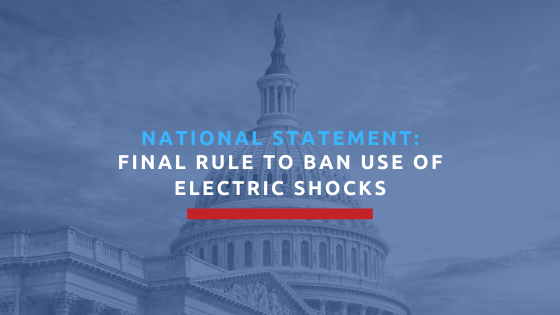 Rockville, MD, March 4, 2020 — The Autism Society of America is gratified that the U.S. Food and Drug Administration (FDA) has published a final rule to ban the use of electrical stimulation devices (ESDs) on children and adults with autism and other developmental disabilities. The new rule prohibits the use of devices that use electrodes that attach to the skin to deliver electric shocks.

This rule is long overdue. “The use of ESDs is outdated, barbaric, and ineffective,” stated Christopher Banks, President, and CEO of the Autism Society of America. “These aversive “therapies” are inherently disrespectful and dehumanizing. All humans deserve to be treated with respect and dignity and to be free from abuse.”

These painful devices are purportedly used to change aberrant behaviors. However, clear evidence shows that they are instead dangerous and ineffective. In 2014, the FDA received recommendations provided by its own Neurological Devices Panel of the Medical Devices Advisory Committee supporting a ban on such devices. The panel concluded that aversive conditioning devices used for contingent electric shock present an unreasonable and substantial risk of injury. The FDA then proposed a federal rule to ban their use in 2016 but challenges to this rule allowed its use to continue.

Dr. Jack Scott, Autism Society Board member stated, “modern behavioral treatment, especially when informed by Positive Behavioral Interventions and Supports or PBIS, render such devices outdated and, in light of the fundamental disregard of the human rights of the individual, completely unnecessary.”

The Autism Society also thanks Senators Patty Murray (Washington), Chris Murphy (Connecticut), and other members of Congress for their persistent and caring efforts to urge the FDA to finally ban these inhumane devices.

The struggle for full recognition of the rights of all persons with autism and other disabilities to be treated with dignity and respect continues. But the FDA ruling serves as a very positive step forward.