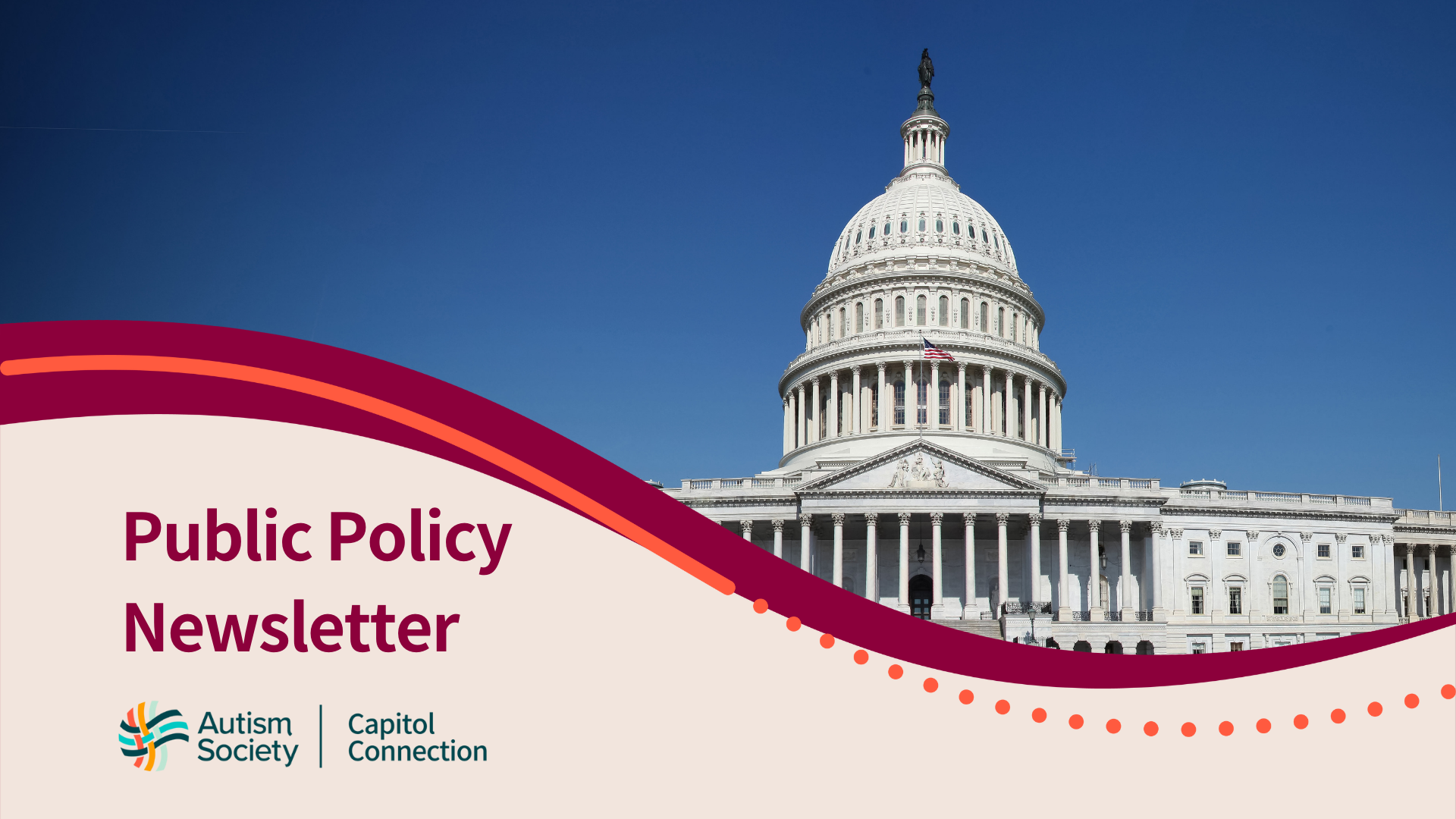 In this issue of Capitol Connection, read about two bills important to the Autism community that are set for final approval, updates on the last three weeks of Congress, administrative actions in Iowa and Virginia, and new resources to use for state advocacy. Please use the Autism Society’s Action Center to urge your Members of Congress to support legislation and funding for the Autism community in this critical final month.

House and Senate negotiators appear to be close to reaching an agreement on a bipartisan omnibus spending deal which paves the way for final fiscal 2023 appropriations congressional leaders hope to pass by next week. Congress passed another week-long continuing resolution to keep government programs operating while they finalize the funding bills. The details of the deal have not yet been made available. The Autism Society will be monitoring these negotiations closely. The Consortium for Constituents with Disabilities (CCD) Education Task Force sent a letter to appropriators outlining its priorities for programs under the Department of Education. The CCD Task Force co-chairs (12) sent a letter to House and Senate leadership outlining all of its priorities for the lame-duck session of the 117th Congress. The Autism Society also signed on to a letter organized by the Disability and Aging Coalition that urges Congress to support additional funding for Medicaid home and community-based services.

The House of Representatives passed two bills important to the Autism Society of America.

Bills to reauthorize Kevin and Avonte’s Law and the Assistive Technology Act were both included in the National Defense Authorization Act that was passed on December 8th. The Senate had already passed both of these bills. The next step is for the Senate to pass the bill, which is expected this week. Kevin and Avonte’s Law provides important funding for prevention activities related to wandering and drowning for individuals with Autism. The Assistive Technology Act provides grants to states to help people with disabilities get connected with communication and other assistive technology and devices.

The CCD DD, Autism and Family Support Task Force sent a letter to Congress urging them to include a ban on electric shock treatment in the omnibus appropriations bill. The letter was signed by seventeen national DD organizations. The House passed an electroshock device ban as part of the Food and Drug Administration (FDA) User Fee legislation and a similar ban was adopted by amendment during the Senate’s markup for the User Fee legislation. While we were disappointed that the provision was not included in the 5-year extension of the User Fee bill, the clear bipartisan support for this provision makes the ban an ideal provision to include in the end-of-year omnibus funding bill. The Autism Society also issued an action alert urging allies to contact their members urging them to support the ban. Approximately 500 letters were sent through the Autism Society’s Action Center. It’s not too late to send a letter!

Senator Warnock (D-GA) won his runoff election against Herschel Walker in Georgia. The Senate is now 51-49 with Democrats in the majority. The final House numbers are 222 Republicans to 213 Democrats, with Republicans retaking the majority. The Autism Society will be sending a welcome letter to all new Members of Congress. Autism Society affiliates are encouraged to send welcome letters to their new Members of Congress as well.

The Autism Society of America submitted comments on the 2022 National Strategy to Support Family Caregivers. The Strategy was developed jointly by the advisory councils established by the Recognize, Assist, Include, Support, and Engage (RAISE) Family Caregivers Act. The Autism Society’s comments urge the federal government to significantly increase investments into programs that support families such as the Lifespan Respite Care Act and the National Family Caregivers Program. It also urges increased funding for Medicaid home and community-based services (HCBS) that include family support services. Autism Society affiliates are encouraged to use the suggested state-level strategies in their advocacy efforts to increase ways to support families in the state. The state strategies in the report focus on innovative ways states can rebalance Medicaid spending to support HCBS. Thank you to the affiliates who submitted comments.

The National Council on Disability, an independent federal agency established to advise the President and Congress, published a new report “Strengthening the HCBS Ecosystem.” The report provides a history and analysis of the HCBS system and provides recommendations to Congress and the Administration to end the institutional bias in Medicaid by making HCBS a mandatory Medicaid service with a minimum standard set of services under 1905(a) and by creating a new, single, HCBS authority to alleviate the complexity and administrative costs associated with so many different programs. The legislation should align financial eligibility pathways and replace enrollment caps with functional eligibility criteria; making Medicaid portable across state lines. This report can be used for federal and state advocacy efforts to reduce waiting lists and increase investments in services and supports. The Autism Society provided comments in response to NCD’s request in preparation for this report and will be on a panel at an upcoming NCD meeting in January.

The Biden Administration announced a six-week campaign through the end of the year urging Americans to get their updated COVID-19 vaccine. The six-week campaign will focus on reaching seniors, people with disabilities, and other communities that were hardest hit by COVID-19 by making it even more convenient to get vaccinated and increasing awareness. The press release also announced additional funding for community health centers and community-based organizations to increase the pace of vaccinations. The full statement for more information.

With an uptick in children and youth requiring specialized inpatient psychiatric care, this blog from the National Association of Medicaid Directors highlights state Medicaid strategies to support children with complex co-occurring chronic behavioral health conditions. State advocates can use these strategies to bring them to scale in their own states.

As states continue to implement the new National Suicide and Crisis Hotline, the Substance Abuse and Mental Health Services Administration of the Department of Health and Human Services (SAMSHA) published a National Guideline for Child and Youth Behavioral Health Crisis Care. This document captures recommendations from an expert children’s crisis continuum workgroup, best practices identified in the research, and learnings from pioneering children’s crisis response programs.

The Centers for Disease Control and Prevention is awarding $3.2 billion to help state, local, and territorial health departments to strengthen their public health infrastructure. The $3.2 billion includes $3 billion from the American Rescue Plan Act of 2021 for 107 jurisdictions to recruit, retain, and train their workforce. CDC will also award a total of $140 million from the new Public Health Infrastructure and Capacity appropriation to jurisdictions to strengthen and revitalize their foundational capabilities. Lastly, national partners will be awarded $65 million to provide training, evaluation, and communication support to jurisdictions as they put the new funding to work. For more information, including a full list of funded jurisdictions and national partners, visit  www.cdc.gov/infrastructure/.

CRS Report on Federal Hiring of People with Disabilities

The 47th anniversary of the passage of the Individuals with Education Act was in November. Valerie C. Williams, Director of the Office of Special Education Programs and former Autism Society Public Policy Committee member, published a blog reflecting on what more needs to be done to ensure students with disabilities have full and equal access to quality education. The statement includes a number of excellent resources that can be used to advocate for special education services at the state and local levels as well. The Autism Society has asked Williams to speak to our Public Policy Committee early in the new year.

The Department of Justice recently announced they have updated their Americans with Disabilities Act (ADA) website to be more accessible and efficient on mobile devices, include easy-to-use navigation tools, and is written in plain language. The website explains the protections the ADA provides and includes a form to report violations.

The Kaiser Family Foundation published an issue brief on the waiting lists for home and community-based services (HCBS). They note that waiting lists fluctuate depending on how states screen for eligibility resulting in incomplete data on the number waiting for services. They found that of all those waiting for waivers, 84% have IDD and on average wait 67 months to receive services. States reported workforce shortages of direct care workers as the primary impact of the COVID-19 pandemic across all HCBS settings in KFF’s most recent survey of state HCBS programs. Waiting lists may reflect both shortages of workers and insufficient state funds. It remains to be seen how policy changes enacted during the pandemic will affect the provision of HCBS in future years and whether the investments in HCBS through the American Rescue Plan Act will result in capacity increases even after the federal funding ends.

The U.S. Department of Justice Civil Rights Division filed a complaint and a proposed consent decree with the State of Iowa to resolve allegations that conditions at Glenwood Resource Center (Glenwood), an institution for individuals with intellectual/developmental disabilities (IDD), violated the Constitution. Glenwood and Iowa will now be subject to oversight and accountability to ensure individuals are given all support to transition into the most integrated setting to engage in their communities. Read more here.

Department of Ed Action in Virginia

The U.S. Department of Education’s Office for Civil Rights announced a resolution agreement with Fairfax County Public Schools of Virginia to ensure the District is providing students with disabilities the educational services they are entitled to including compensatory services. Fairfax County Public Schools must reexamine services offered during remote learning to determine if each student received adequate services and then access if compensatory services are required.

5 Tips for a Sensory-Friendly Thanksgiving 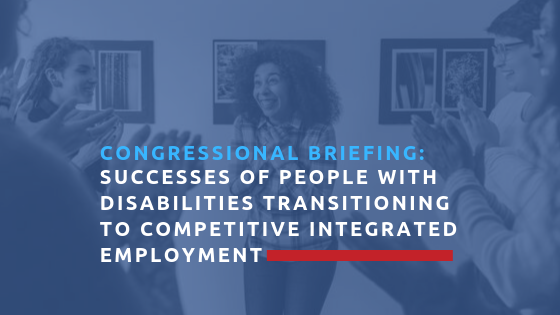