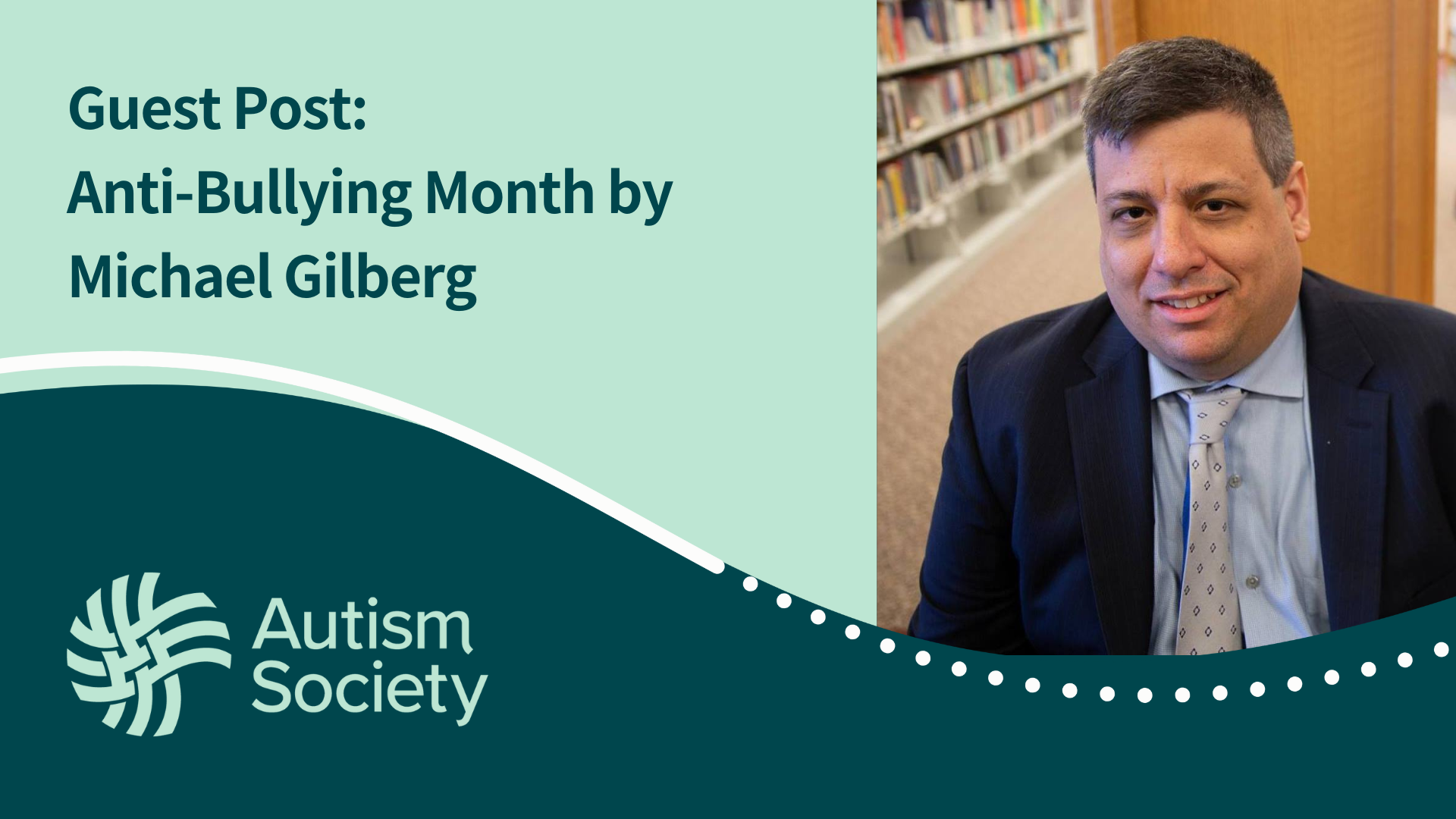 In the following blog post, our featured author Michael Gilberg, a member of the Autism Society of America’s Council of Autistic Advisors, uses identity-first language and person-first language.

Because Autism and the experiences of living with Autism are myriad and unique, and individuals who self-advocate have preferences about how to describe their identity, we always recommend asking an individual what their preference is. The Autism Society honors and recognizes that both identifiers are valid for individuals, our practice is to start written materials with person-first language and use identity-first language as a secondary reference after the opening use.

October is National Bullying Prevention Month. Bullying remains a huge problem in our nation’s schools, especially for Autistic children. As a practicing special education attorney, as well as an Autistic self-advocate, I see these cases repeatedly with Autistic children being bullied. According to Pacer’s National Bullying Prevention Center, 1 out of every 5 students has reported being bullied. Pacer also cites a study that 33.9% of students with Autism report being bullied, second only to students with emotional disorders. These statistics are likely underreported since many students are afraid to report being bullied due to fears of retribution.

COPAA (Council of Parent Attorneys and Advocates), the leading special education advocacy organization made up of Attorneys and Advocates representing parents and students in special education, has information on how bullying in school is illegal when it crosses the line into Disability Harassment. Under the Individuals with Disabilities Education Act (IDEA) and Section 504, the two laws governing Special Education when a student is bullied can constitute a denial of a free and appropriate public education (FAPE) which every student is entitled to by law. The U.S. Department of Education defines disability harassment as “intimidation or abusive behavior toward a student based on disability that creates a hostile environment by interfering with or denying a student’s participation in or receipt of benefits, services, or opportunities in the institution’s program.”

In my practice, I often represent Autistic children and students with other disabilities who are the victims of bullying. Sadly, too many school districts do not take these complaints seriously and might even blame the bullying victim. In one case, the school told the parents of one of my Autistic clients that their Autistic son should learn to “be more normal” and that it was his fault. Initially, my client was suspended as the sole aggressor, until the surveillance video revealed the other student clearly hit my client first and my client was only defending himself. Despite this, the school insisted he must have said something to bring it on himself and therefore had to be at fault; in addition, there were numerous demonstrated incidents of systemic bullying by other students. Victim shaming is all too common and needs to be acknowledged in order to prevent and create effective bully-prevention strategies.

Unfortunately, too many schools do not teach tolerance of differences and acceptance of students with Autism and other disabilities. The federal government’s anti-bullying website explains how we need to teach tolerance, acceptance, and understanding. Not only do we need to encourage students to self-advocate, but we need to teach their peers to do the same and not join in the bullying. The site also discusses school resource officers (SRO), which are local police officers in the school as a resource. However, there have also been concerns about how these SROs have interacted with students with Autism who might be having difficulty. This is why part of protecting our students includes educating these officers about Autism and encouraging them to take meaningful action.

One emerging issue in school bullying that the law has not kept up with is the recent advent of cyberbullying. I have seen a number of cases where students are bullied online by their peers and while normal bullying laws sometimes cover these, in many cases the schools will say it occurred outside of school, so it is not their responsibility. Despite the fact that these cyberbullying incidents result from, or are directly related to in-school activities, the schools will often deny responsibility and send the family to law enforcement instead who often do not handle these matters. The law has not specifically been updated to cover online bullying yet, but hopefully will be in the future, though I believe current anti-bullying laws can apply to cyberbullying. Ultimately bullying remains a problem in our nation’s schools specifically for children with Autism and other disabilities, and we must create safe spaces for children to report these incidents and teach students to be more accepting and tolerant.

Please note that all opinions expressed in this post are a reflection of the author’s personal experiences or preferences and do not reflect the opinions of the Autism Society of America.